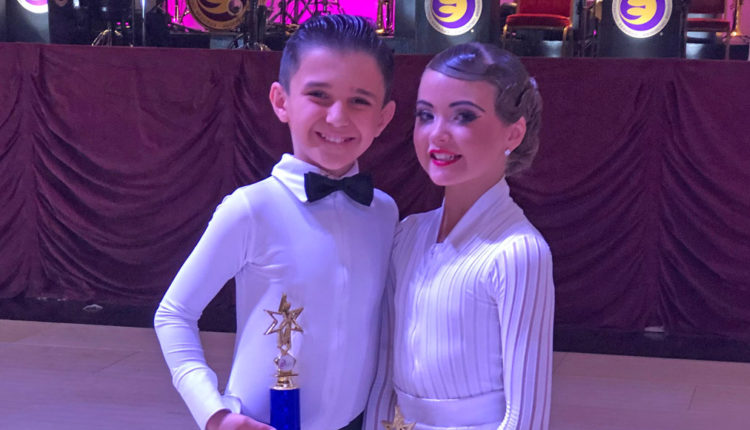 Caleb Arslan and Daisy Barker may not be teenagers yet but they have already made giant strides in the last year towards establishing themselves as up-and-coming stars of the future in the dance world.

Since being paired together in the summer of 2018, their progress reached a major goal in November when they were finalists in the British National Championships, formerly the Closed British Championships, at Blackpool Winter Gardens, the pinnacle of ballroom dancing venues and often regarded as the home of ballroom dancing. They competed in the juvenile section of the Latin competition in what was their first appearance at this prestigious event for the top couples in the under 12 age group in the UK.

Caleb (11), who lives in Felixstowe, started his dancing at the age of five while Daisy from Chelmsford, just six months older than Caleb, started out when she was six years old. They attend the Feather Steps Dance Academy in Ipswich and Colchester where they are coached by Jemma Girling, a principal of the school, together with Michelle Postlethwaite and Crystal Main.

Jemma said of them: “Their progress has been amazing and reflects the dedication and hard work they have put in over the last 18 months. This status of being in the top six in the country in their age group is no flash in the pan either as they have been building up to this level as the year has progressed.”

Indeed, results in 2019 tell their own story. In January they were ballroom and Latin finalists, finishing fifth and seventh respectively in the beginners section of the national Champions of Tomorrow event. In March, they won the DSI (London) Battle of the Ballroom in their age group at Trinity Park, beating off competition from other local dance schools. June marked the progress made since January when they won the Latin section of the juvenile beginners of the national Stars of the Future event and finished second in ballroom.

Other successes and achievements followed as they continued their development and experience, culminating at Blackpool where they have put themselves firmly on the national stage and caught the eye of many national judges.

This year sees them move up into the junior ranks, where they will be competing against dancers up to four years older, but watch this space as their development continues.

Ben Caldwell: The Life Of An Athlete