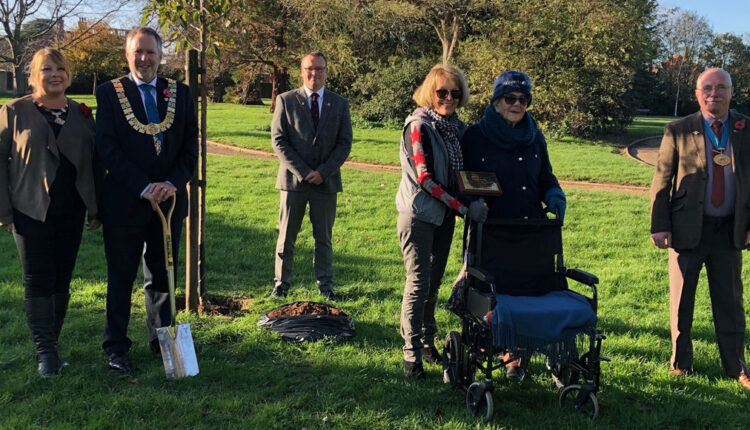 Tree Planted At Allenby Park In Honour Of Joan Rich

Felixstowe Town Council has planted a cherry tree in Allenby Park to mark the achievements of local resident, Joan Rich, following her challenge of walking 102 laps of the park by her 102nd birthday and raising almost £35,000 for the NHS.

Joan and her family were invited to join the Mayor of Felixstowe, Cllr Mark Jepson and the Chairman of East Suffolk Council, Cllr Keith Robinson, for the ceremonial planting on Monday 2 November.

Joan, who celebrated her birthday in September, set herself the challenge having been inspired by Captain Sir Tom Moore and seeing ‘NHS’ mowed into the lawn of the park during the coronavirus lockdown.

Accompanied by her daughter Diane, Joan covered around 35 miles during her walks of the park, completing the final lap on her 102nd birthday, cheered on by local residents, children and a guard of honour by members of the Royal Military Police.

The money she has raised is being donated to NHS Charities Together, which will be used to pay for vital projects and medical equipment to support healthcare staff, volunteers and patients. A former NHS worker and Second World War veteran, Joan worked at Felixstowe General Hospital as an auxiliary nurse in the outpatient department from 1964 to 1978.

The tree was supplied by the town council and will be maintained by East Suffolk Norse. Beneath the tree a plaque was placed, reading:

“Planted by Felixstowe Town Council in honour of retired nurse Joan Rich. On her 102nd birthday, Joan completed her mission of walking 102 laps of this park to raise funds for the NHS during the 2020 coronavirus pandemic.”

Joan and her daughter are pictured with the Mayor & Mayoress of Felixstowe, Cllr Mark Jepson and Mrs Julie Jepson, the Chairman of East Suffolk Council, Cllr Keith Robinson and Cllr Darren Aitchison.

Watch the What a Carve Up! Teaser Trailer