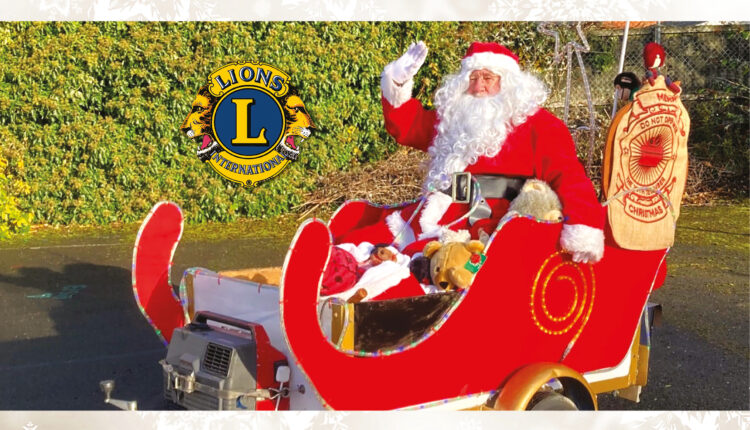 Smiles Galore for the Lions Club of Felixstowe Wave to Santa Tour!

Each weekday evening from 4 to 21 December, the Lions Club of Felixstowe accompanied Santa around town for the Wave to Santa tour of Felixstowe and it was a huge success!

In his colourful sleigh adorned with Christmas lights, Santa received countless waves and smiles from children and their families each night as he made his way through the streets of Felixstowe. Social media was brightened with positivity as comments, photos and videos of Santa on his travels were posted by families, talented photographers and the Lions. It was a welcome lift during a challenging year.

As well as their admirable efforts looking after, preparing and erecting the town’s magical Christmas lights again this year, the Lions wanted to bring Santa to the children of Felixstowe, Walton, Kirton and the Trimleys in a safe, socially distanced way. Residents could follow Santa’s progress through the town via an online ‘Santa Tracker’ so they knew when to run outdoors, they were asked to wave on their doorsteps (and not approach the sleigh) and donations, collected for The BASIC Life Charity and the Salvation Army in Felixstowe to help local families, were made via text message. Thanks to the generosity of those who donated, the Lions were able to give £200 to both charities.

Following the success of the tour, the Lions said: “The Wave to Santa tour was very well received in all areas and to date we have donated £200 to each of the Salvation Army and Basic Charities.”

Commenting on their donation, BASIC Life said: “BASIC were delighted to receive a donation of £200 following the Lions Santa tour – this will help us to continue to offer support to the community.”

The Salvation Army, Felixstowe, thanked the Lions. They said: “We would like to say a heartfelt thank you for the support from the Lions this Christmas. Every donation continues to enable us to help those in need in our community. Thank you to all who gave and God bless you.”

Richard Woolnough, president of the Lions Club, gave an announcement via Facebook on 21 December: ‘Tonight is the last night for helping Santa wave to the children of Felixstowe. It has been a great success. I want to thank Facebook page hosts who have copied out our route maps and the Santa Tracker, and to all who have posted such wonderful comments. It was always our main intention to give the children a chance to see Santa and not to raise money. The looks on hundreds of beaming faces was reward enough. We have had a ‘pay by text’ scheme as we decided not to collect cash and I am pleased to say your donations have meant we have been able to give interim payments of £200 each to the Basic Charity and to the Salvation Army to help support their fantastic work with local needy lonely people and families over Christmas.’

Matthew Good Foundation Presents £1997.60 to the Lions Club of Felixstowe

Entertainment in Felixstowe for The Queen’s Platinum Jubilee Weekend