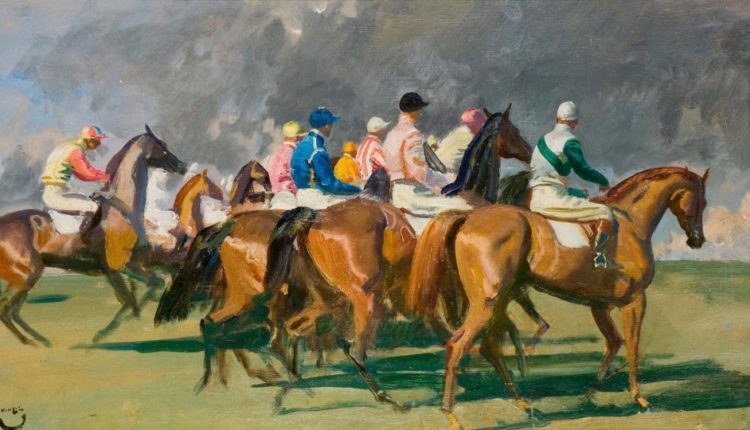 Our Very Own Suffolk Artist…

I always cringe when I hear people talk about famous Suffolk artists. The reason is that they never seem to mention, in my opinion, one of the best artists that lived in Suffolk. I have for many years admired Alfred Munnings, known as AJ.

Alfred was born on at Mendham on the Suffolk/Norfolk border, yes another son of a miller, in 1878. This was where his love of the country and of horses began. On cold winters nights Alfred and his brothers would sit with their father and draw, sometimes on old envelopes if they had no paper. Like many artists, Alfred was also a very good writer. His poetry was often quite funny and in later life he would love to stand in a pub and read out his very long poems to a captivate audience. He was a great performer of sorts!

After serving six years as an apprentice at a letterpress printers in Norwich, and also studying art part time, AJ started out on his career as an artist. I think everybody would disagree that AJ was quite a character; he loved nothing more than to be with a crowd of people in a pub singing at the top of his voice and creating havoc. Quite often with no money to pay his bar bills, he would quickly do a drawing of the pub landlord for payment.

Alfred’s work went from strength to strength and he was soon painting for the rich and famous. He was president of the Royal Academy and was a friend of Sir Winston Churchill (who he fell out with at some point over a speech at the RA dinner).

Alfred eventually met and married his second wife and they purchased the most beautiful house at Dedham. Alfred painted many scenes of the river and adored living so close to the river.

After AJ’s death Violet tried to buy back many of his paintings from all over the world. The house is now a museum displaying AJ’s paintings. I go there very often to look at Alfred’s work and just sit in silent wonder.

To me, Afred Munnings will always be my number one Suffolk painter.

The Musings & Mutterings Of A Septuagenarian In Lockdown