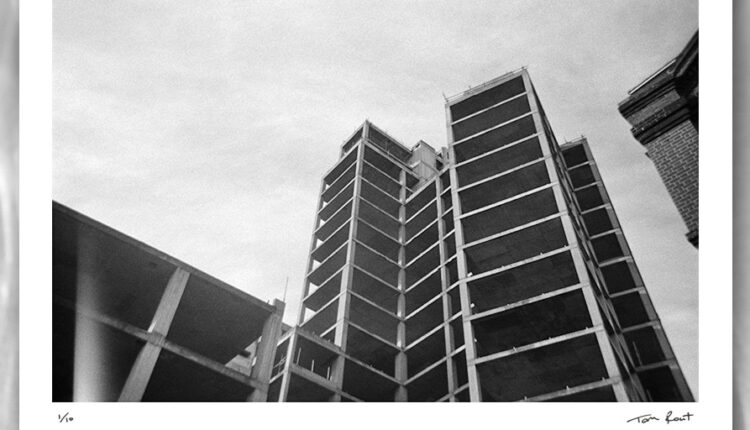 Having turned his love for film-making into a career seven years ago, Tom began taking photos as a way of creating without the pressure of briefs or deadlines. After recently relocating North, it seemed the perfect time to delve into the dozens of rolls of negatives and find three images that defined his time in Suffolk.

The images depict The Forum Amusements in Felixstowe, The Winerack in Ipswich prior to its completion, and a field of cows in Rendlesham. Prints are available as limited edition, signed, fine art giclée prints in three sizes, A4, A3 & A2 with 20% off all orders for In Touch readers using the code INTOUCH20. Prints are available at: tomroutcinematography.com/prints.

Tom was born in Ipswich where his filmmaking career began in 2014, working for local event production companies. After two ears he went freelance and began working with bands, businesses and on events throughout the world. You may recognise his three music videos with Ipswich band Hot Tramp, his short film on Woodbridge Violins, or his work with Shadow Gallery Barber Shop, which has helped it become one of the most popular barbers in Ipswich.

Until now, Tom’s photography has been purely a personal documentation of life, with the occasional image able to be found on his Instagram account (@tomroutcinematography). He only shoots on 35mm film, and primarily uses a beautiful 1980s Olympus camera that he was lucky enough to find in a charity shop display cabinet.

After relocating to Manchester at the beginning of the year, Tom started looking back through hundreds of images he’d taken around Suffolk and settled on three iconic Suffolk scenes. The film negatives were scanned to the highest possible quality and resolution and prepared for printing.

The images are giclée printed onto archival fine art paper by Manchester-based print studio Klein Imaging, and signed and numbered by Tom before being shipped around the world. Every part of the process has been done to the highest possible standard to result in a print that will last a lifetime.

Tom’s film-making work can be found at: tomroutcinematography.com.

Support The Sick Children’s Trust in memory of Maisie Gooderham

Have You Ever Considered Becoming A Magistrate?