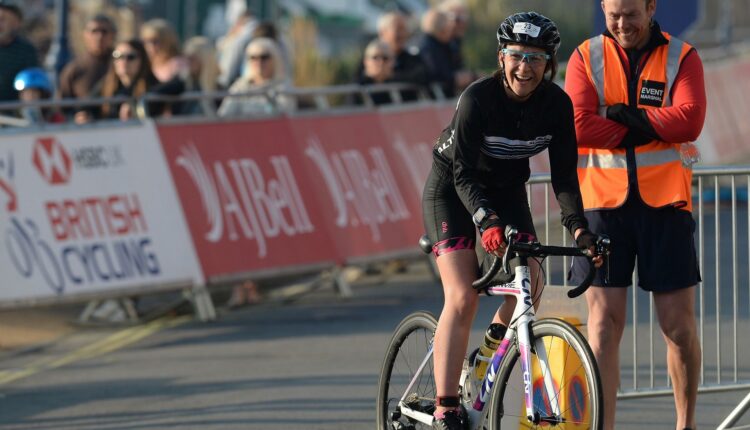 Organisers of Felixstowe Triathlon are celebrating an ‘incredible’ national recognition for the endurance event – in only its first year.

Felixstowe Triathlon was named Large Event of the Year at the 2022 HUUB Triathlon England Awards – after already having received the honour for the East Region.

The awards were announced on Friday 11 March by broadcaster Kate Mason and triathlon team leader for Team England at the upcoming Birmingham 2022 Commonwealth Games, Jonathon Riall.

The second annual Felixstowe Triathlon is scheduled to take place just three weeks after the Commonwealth Games close this summer – and entries are still open for the event on Sunday 28 August.

Last year’s inaugural triathlon was organised as part of FelixFest – a weekend of events hosted by East Suffolk Council in partnership with Felixstowe Town Council to coincide with the Women’s Tour cycling race – with competitors of both races crossing the same finishing arch.

Cllr Letitia Smith, East Suffolk Council’s cabinet member for Communities, Leisure and Tourism, said: “I was absolutely thrilled to learn that Felixstowe Triathlon had been recognised by the national governing body for multisport events.

“The fact that the event was chosen after only its first year, and from a shortlist of more established events, is further testament to the amazing work of organisers and volunteers.

“I’m looking forward to the event returning later this year and would encourage people of all ages and abilities to sign up to take part.”

Organisers Mark Weston and Bill Richmond added: “This is incredible recognition and an absolute triumph for events in Suffolk – particularly Felixstowe.

“This magic would not have happened without a huge amount of support from our local council and an amazing local community of volunteers. As local event organisers, we couldn’t be prouder.”

Individuals and teams of three can sign up to take part in this year’s event, organised by Suffolk Tri with the support of East Suffolk Council and Felixstowe Town Council.

The Supersprint starts with a 300m swim in Felixstowe Leisure Centre’s pool, while the Sprint and Standard races have an open water start with an 800m or 1,500m swim.

The swim will followed by a 20km or 38km bike route through the Suffolk countryside, before returning via Felixstowe Ferry to finish with a 3km, 5km or 10km run along the Prom.

To secure a place, visit the Felixstowe Triathlon website.