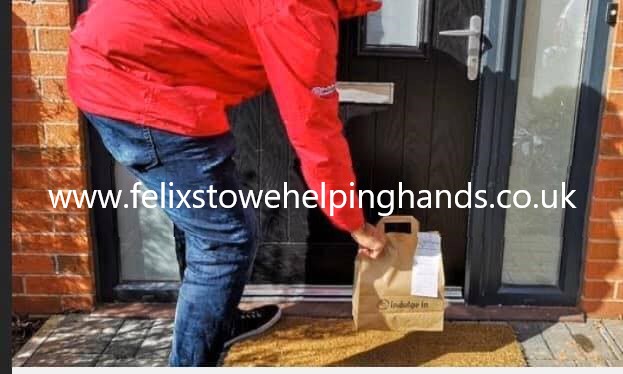 Local initiative to help during the Coronavirus pandemic

Felixstowe Town Councillor Darren Aitchison founded Felixstowe Helping Hands following the HM Government announcement about the public needing to stay at home and only go out if absolutely necessary.

The idea behind the group is to help those who would normally go shopping or pick up medication themselves but are now being advised to self-isolate or shield. This includes those aged over 70 and those with underlying health issues. This is very much a community response helping each other during the Covid-19 crisis. Darren started the Facebook group with a request for volunteers who would be happy to help their community and in no time at all had more than 2,500 members. In just under three weeks the group has helped well over 1,000 people by either going shopping or collecting their medication from a pharmacy. Volunteers also collect pet medication from vets and support local shops with deliveries when needed.

Darren explains how it works: “The majority of our requests for help come via our phone lines as most people who need our services don’t have the internet. In order to reach these people and let them know we are here to help them we hand delivered 14,000 information cards to houses in Felixstowe, Walton and the Trimleys over two days. We also get requests via our Facebook page which is very busy with requests and offers of help, as well as advice about many other local services that are available during this challenging time. We also get referrals from East Suffolk Council and local community health workers and care organisations.”

One issue which Darren had to consider from the beginning was how would people were going to pay for their shopping or deliveries.

“Some people are able to pay online but many don’t have this facility so we have access to the Felixstowe Relief Charity Fund into which the town council and local companies have donated funds. Amongst other things, this fund can be used to repay our volunteers who buy shopping for the isolated, which means that nobody has to worry about getting their shopping and our volunteers won’t be left out of pocket by helping others. Anyone can donate into this fund via our JustGiving and GoFundMe online pages or directly via the town council.”

Debbie Bartlett has helped from the start and has been a fundamental part of putting the processes and procedures in place which allow the volunteers to help as many people as possible. Debbie is also responsible for running the Felixstowe Phone Friends element of FHH which puts volunteers in telephone contact with the elderly and lonely of the town.

“This is such an important thing during the current crisis,” says Darren. “It not only helps the person being called but also the caller and boosts mental health on both ends of the phone line. Many friendships have been forged during these calls that I fully expect to carry on long after this crisis is over.”

There are many triage callers working behind the volunteers. They call the person in need to get their details and then match them to a volunteer who can help them on a one-to-one level. All of the triage callers are volunteers and put in very long hours seven days a week helping as many people as they can.

Of course there are several groups in Felixstowe helping the community. Felixstowe Area Community Transport Service (FACTS) is doing an amazing job delivering medication for the over 70s who use the Felixstowe Pharmacy based at Grove Medical Centre. BASIC Life Charity and the Salvation Army are supplying free food to anyone who needs it. Timebank are offering support and guidance, as are the Citizens Advice Bureau and Age UK, and there are many other long-established community groups which have been helping the community for years and will continue to do so longer after this crisis ends.

“They all need our support and praise and I know they will get it. Felixstowe can be proud of its response and I’m very grateful to everyone who has helped in any way.” says Darren