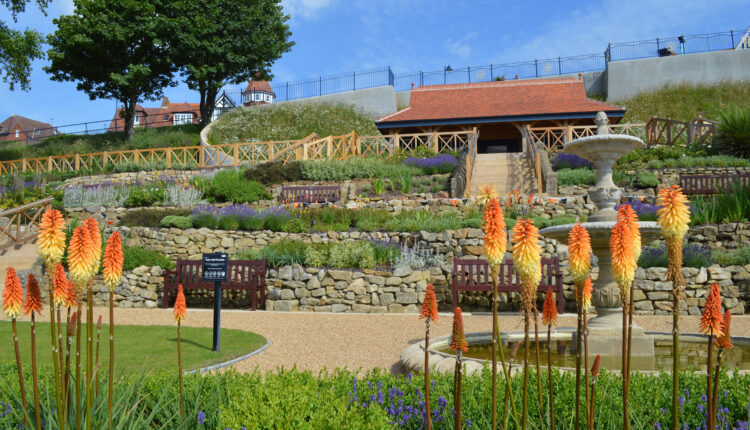 The history of Felixstowe Seafront Gardens is well documented and extends from when the present-day gardens were scrub-covered slopes running down to a sandy shoreline. Much of the gardens have developed in a piecemeal manner during the 18th century as houses along the seafront were built and embellished by gentlemen landowners.

The town of Felixstowe was establishing itself as a fashionable destination in the late Victorian era, based around the health-giving properties of the ‘spa waters’ flowing from the natural springs in the cliffs.

A visit to the town by Augusta Victoria, Empress of Germany in 1891 increased tourism to the area. It was during this time that Hamilton Gardens, the Town Hall Garden, and the steep ivy-clad terraces edging South Beach Mansion were established.

To build on this success, the Urban District Council developed the seafront further. A promenade and granite sea wall were completed in 1904 whilst, in parallel, gardens belonging to the Felix Hotel (now Harvest House) were extended and improved in 1903.

At that time, the gardens were of an exotic and distinctive nature, highlighting the fashion at the time for showcasing unique planting and highly decorative landscape works. In 1919, steps and paths were created to provide public access from the top of the cliff at Hamilton Gardens to the gardens on the seafront.

In 2003, Felixstowe Seafront Gardens were included by English Heritage on the Register of Parks and Gardens of Special Historic Interest. The restoration of the gardens was completed in 2015.

A group of volunteers, the Friends of the Felixstowe Seafront Gardens, meet every Wednesday and work alongside the lead hands to help maintain the gardens.

Polite notice: Users are asked to keep dogs on the lead in the garden.

For further information on the Felixstowe Seafront Gardens: www.visitfelixstowe.org.uk/things-to-do/the-seafront-gardens

A WORD FROM YOUR MAYOR