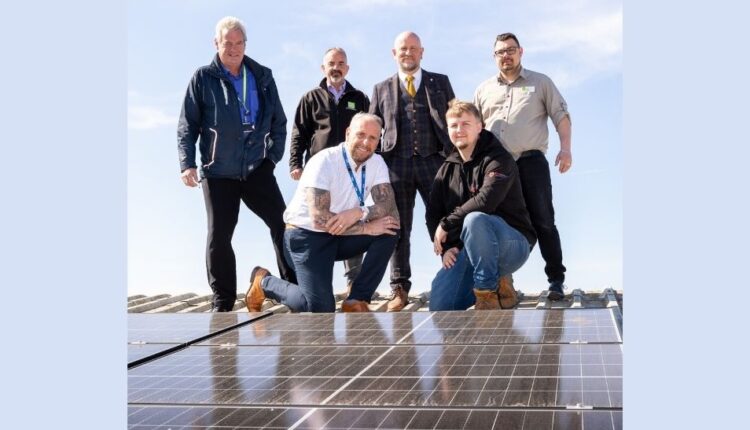 The East of England Co-op supermarket on Samsons Road in Brightlingsea is now benefitting from zero-carbon electricity after a 130kWp solar panel installation was added to its roof.

The 326 PV solar panels are expected to generate 122.5MWh/year of electricity which will be fed directly into the store and used to power everything from lights and heating, to fridges and tills.

Work on the installation started back in February and was handed over to the East of England Co-op from the contractors on 20 April 2022.

The East of England Co-op has further installations planned for two stores in Norfolk and is looking into systems for some of its stores in Suffolk.

The supply and installation of the solar panels were possible following a successful bid to Suffolk County Council’s Renewable Energy Fund. The East of England Co-op was eligible to apply to the scheme with its headquarters being based in Suffolk.

Commenting on the installation Steven Fendley, Head of Sustainability at the East of England Co-op, said:

“The solar panel installation at our Brightlingsea supermarket is the first of three that we’re adding to our stores this year as part of our efforts to expand our on-site renewable energy production. Very soon after the installation went live the store went green for the first time, meaning it was running entirely on zero-carbon electricity generated on site. As we move towards the summer and enjoy more sunshine, this will happen more and more and we will be able to reduce our use of imported electricity.

“In total, we anticipate the three solar panel installations taking place this year will generate over 200,000 kWh and save around 45 tonnes of CO2e emissions each year. I’d like to thank Suffolk County Council for supporting local business through this fund and championing a net zero future.”

“Following the Renewable Energy Fund’s first successful solar panel venture at the University of Suffolk, it’s exciting to see another installation completed – it’s a big team effort as we all work towards reducing our carbon emissions as much as possible.

“I’m pleased that we’re in a position to support the East of England Co-op on its journey as it moves its stores across to greener energy. I hope these initial installations will enable more to be rolled out across some of their 70 stores in Suffolk.”

Vertas Property Management has been involved with the delivery of the Brightlingsea Co-op PV project for Suffolk County Council from the very start. Vertas will continue to remotely monitor the system, recording the efficiency and energy input of the array and identify any early warnings for maintenance.

The East of England Co-op’s two further solar installations are taking place in Long Stratton and Acle in Norfolk later this year, with feasibility studies currently underway for two stores in Suffolk.

For more information about the East of England Co-op’s approach to sustainability, visit www.eastofengland.coop