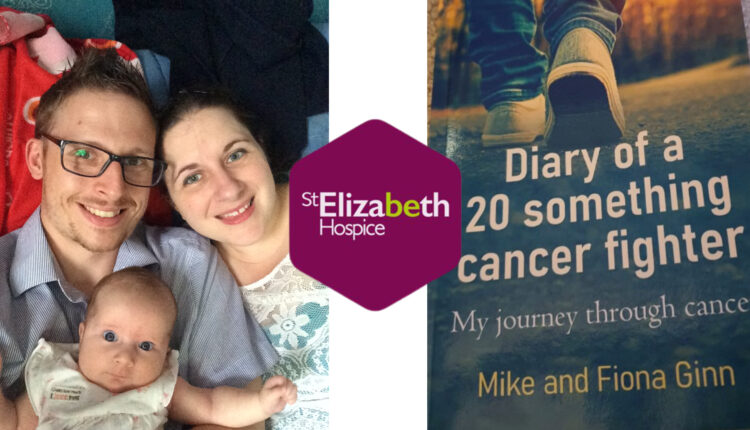 Diary Of A 20-Something Cancer Fighter

Book published in memory of Mike Ginn to provide strength and hope to others.

Fiona and Mike Ginn were married in 2011. Mike was a respected primary school teacher, football manager and sportsman. Fiona was enjoying her job on the fundraising team at St Elizabeth Hospice.

In May 2016, their daughter Hope was born. Everything seemed to be going well until in July 2016, just three months after Hope’s birth, their world was turned completely upside down when Mike was diagnosed with leukaemia. He was given just a 20% chance of surviving past five years.

On the day of diagnosis as Mike was admitted into Ipswich Hospital to receive chemotherapy to fight the aggressive disease, he started writing about his feelings which he published on an online blog. The blog quickly became very popular, being read by over 10,000 people both locally and across the world who were inspired and moved by his story.

Mike wrote with such honesty about the treatment he received and how his diagnosis impacted upon family life. He noted his reactions and thoughts, providing hard-hitting moments as well as humour. It was a real inspiration for readers as his courage and strength in complete uncertainty shone through.

After a bone marrow transplant in June 2017, Mike received the devastating news that he had relapsed with only weeks left to live. He continued to write his blog until he was admitted into St Elizabeth Hospice to receive end-of-life care. This is when Fiona took over the blog, determined to document the remaining few days they had together.

The care Mike received was incredible. He even had the opportunity of having Hope come to visit. It was during this time that Mike spoke about his wishes for his blog to become a book.

Now Mike’s wishes have become a reality. The blog called Diary of a 20 Something Cancer Fighter: My Journey Through Cancer has been published into a book and can be purchased on Amazon.

As well as offering hope and inspiration to others and raising awareness of the support provided by hospices, such as St Elizabeth Hospice, the book also serves as a keepsake for Hope.

Fiona continues to work at St Elizabeth Hospice and is forever grateful for the care they give to so many local people.

Diary of a 20 Something Cancer Fighter: My Journey Through Cancer is available as a paperback copy and E-Book. Just search for the title on Amazon.

The Birth of Radar